The history of handmade paper is long and interesting.

From the early papyrus used for writing in Egypt to the famed paper produced out of the Hollander beater, handmade paper has been doing the rounds for thousands of years. Here are 9 key historical landmarks.

Papyrus is a thick, paper-like material that is made from the pith of the papyrus plant Cyperus. It was used for writing in Egypt much before the making of paper in China. Papyrus is created through the lamination of overlapping layers of plant stem.   The paper is made from fibres that are completely softened in water before being re-constituted into a flat sheet on a screen. 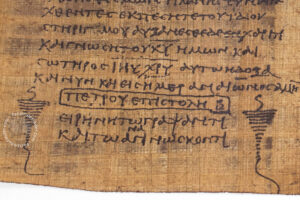 Parchment is made from animal skin such as calfs, sheeps or goats, and is used for writing documents or books. Parchment is limed, scraped and dried under tension. It is not tanned and reacts to changes in humidity, reverting to rawhide if too wet. Vellum refers to calfskin. The earliest Egyptian documents written on treated leather go back to the Fourth Dynasty around 2500 BCE. 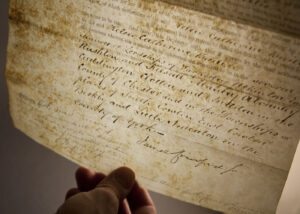 The oldest piece of paper that was used for writing was excavated from a tomb at Fangmatan in Gansu province, China, and dates back as early as Western Han (179-41 BCE). The occupant of the tomb was buried with a paper map laid on his chest, showing mountains, waterways and roads. 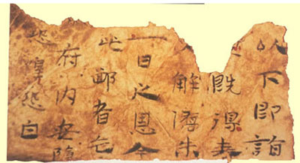 Papermaking is often traced to an official in the Imperial Chinese court called Cai Lun (Tshai Lun or T’sai Lun), during the Han Dynasty and in about 105 AD.
Cai Lun created writing paper using mulberry and other bast fibres along with fishnets, old rags, and hemp waste, but did not invent papermaking. Cai Lun is probably more important for documenting and improving the paper production process so that it could be used on a larger scale.

Papermaking was limited to China (and then later Japan) until 751 CE, when a Chinese army was defeated by an Arab force at the Battle of Talas, which is now present day Kyrgyzstan.
Papermaking secrets were  initially obtained from Chinese prisoners. This led to the introduction of the first paper mill in the Islamic world that was founded in Samarkand, which is modern day Uzbekistan. A later mill was founded in Baghdad (in 793). 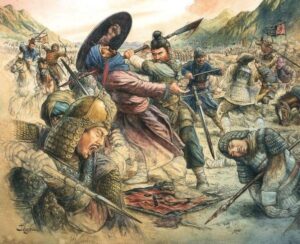 The art of papermaking journeyed to Europe through Islamic influence in the Iberian Peninsula. The oldest known paper document in Western Europe is the Mozarab Missal of Silos from the 11th century. It is thought to have been created using using Islamic handmade paper. The first recorded paper mill in Europe was in Xàtiva, in Spain, in 1151.
Owing to the noise and smell that paper mills create, medieval law stated that these were erected outside the city. The Nuremberg paper mill is the building complex at the lower right corner of this 1493 painting, outside the city walls. 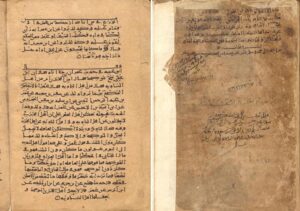 The Gutenberg Bible 42-line Bible is known to be the first major book printed in the West through the use movable type. The Gutenberg Bible is an edition of the Vulgate, printed by Johannes Gutenberg, in Mainz, in Germany. Gutenberg invented the printing press and was the first European to print with movable and re-usable metal type. 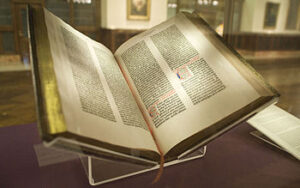 The Hollander beater was developed by the Dutch to produce paper pulp from plant fibre faster than the existing stamp mills. It could produce the same quantity of pulp in one day that a stamp mill would take 8 days to prepare. However, the Hollander makes use of metal blades and a chopping action to cut the raw material, thereby resulting in shorter cellulose fibres and weaker paper. The stamp mill used wooden paddles and the beating process produced longer, more easily hydrated, cellulose fibres. 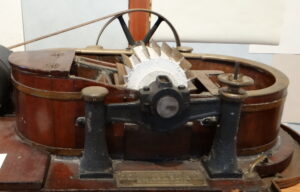 In the late 18th century, an increase in population and the spread of industry, commerce and education increased the demand for paper beyond the capabilities of hand production, thus providing the impetus for the development of mechanised production. Nicholas Robert patented a continuous paper making machine, which was improved by Sealy and Henry Fourdrinier, and the original Fourdrinier machine was installed at Frogmore, Hertfordshire, in 1803. 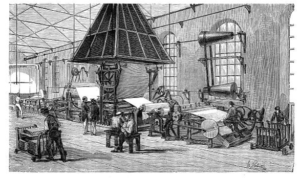 For more on the history of handmade paper